Great Dogs From Our Past 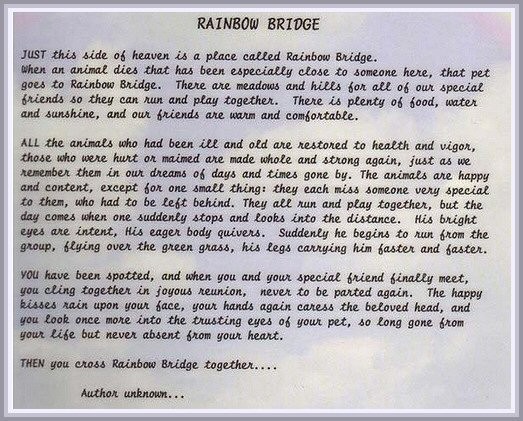 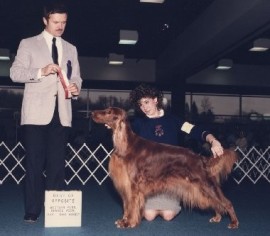 Brandy was our first champion, out of our first litter bred.  She introduced us to many firsts.  A great lady in many respects. 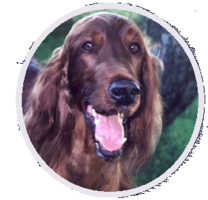 Although Taylor passed in November 2002, 5 months shy of her 14th birthday, her legacy lives on in her children and in their children. She personified the true Irish Setter 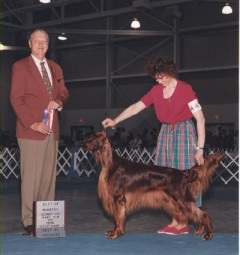 Out of Taylor's first litter, Panda finished her American and Canadian championships on both coasts. After her successful show career, Panda went to the whelping box to try her hand at that. After having 14 puppies in her first litter, she decided agility would be a lot easier. Like jumping through hoops, she quickly received her open agility title. Although Panda passed unexpectedly in 2003, you can definitely see her in her boys Parker and Brody. 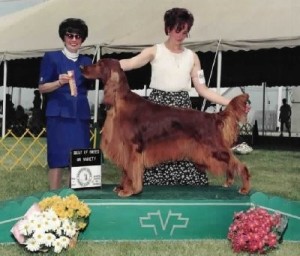 With a heart of a lion, Brody loved everyone and every dog he ever met.  I miss you BoBo.  Gone but never forgotten. 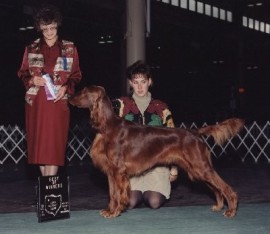 Lunn's first home-bred champion, Parker finished his American championship exclusively from the Bred By class. Like his brother Brody, Parker was also bored sitting at home and spent most of his life living with his good friend Karen Booth. Karen showed "Doodles" to two agility titles. 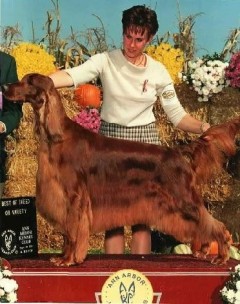 Always breeder/owner handled, Mason finished at 19 months with two specialty majors. Surpassing all of our expectations, Mason finished 2002 as the #3 ranked Irish Setter in the country. 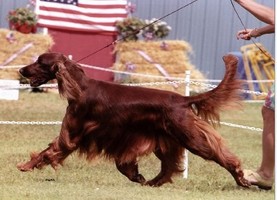 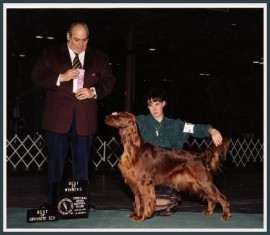 Gillian was the second to finish from Taylor's last litter, finishing with a specialty major. She had one litter of 9 pups in 2002. 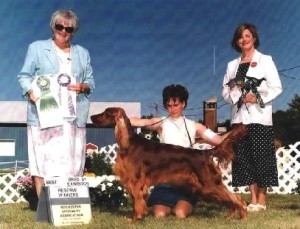 CH. Lunn's A Heart of Gold

Stacey, a stylish and elegant bitch, was the fourth to finish from Taylor's last litter, finishing with specialty majors from the Bred By Class. She had a litter of 5 beautiful pups in 2003. Stacey was owned and loved by Chris McSherry, southern Ohio. 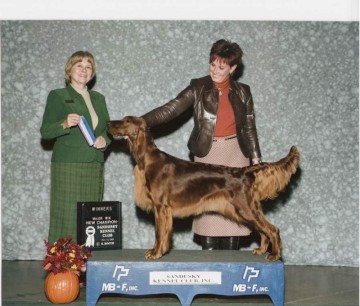 Unexpectedly on July 8th 2013, Pepper tragically passed on to the Rainbow Bridge.  She was loved and cared for by Garth Baker of Columbus OH.  She passed away in his arms and was his heart dog.  She will be greatly missed by all who ever met her. She had the most wonderful temperament and never met a person or dog/cat she didn't like.  Garth and we at Lunn's are heartbroken over the tragedy and hope that she is running free and chasing all the birds, squirrels and rabbits to her hearts content.  May the shamrocks fall softly sweet girl.

In her short life here with us, she finished her championship at 14 months of age with 3 majors. She produced 4 beautiful puppies that will hopefully have her spirit for life and wonderful disposition. 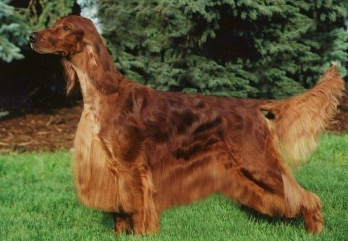 Phoebe finished her championship at 15 months of age.  She grew up and I brought her back out as a special.  In the 2 1/2 years she was shown she won many groups and multiple Best in Specialty shows.  She retired in  2007 to have puppies.  Her first litter by "Alex" Lunn's Leading Man, produced 5 puppies and three are champions, one is a Master Hunter with a CD and agility title.  Her second litter by "Peter" CH. Cairncross Silverado produced 5 puppies and 4 finished their championships by the age of 2 years old.  That gave Phoebe her ROM ( Register of Merit) for producing 7 champions.  We are very proud of Phoebe's accomplishments in and out of the ring and whelping box.  She is now living the good life as Queen of the house.

Although Phoebe has crossed over the rainbow bridge, she lives on in her kids, grandkids and great grandkids.  She is missed everyday and hope to see her running again in the future.  Miss you "green bean" XXXOOO 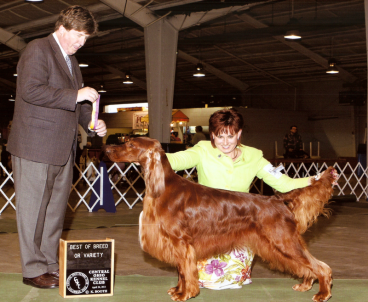 Edward finished his championship at 13 1/2 months old.  He was shown very selectively.  He is showing to be a great producer as well.  Edward has sired 7 litters to date and has produced many champions.  Edward is OFA Excellent and PRA tested clear.  He is available for stud to approved bitches.

Just shy of his 14th birthday Edward's spirit for life was gone.  We knew it was time to say good bye to this amazing beautiful soul.  May the shamrock fall softly for you.  Eternal hugs and kisses to the BEST boy!!

THE VETERAN
They say I’m a Veteran as I’m old and grey
but don’t you remember…?  I did have my day
I was a show dog once, so bold and proud
Oh, I can hear it now – the applause of the crowd!
I’m gentle and patient with puppies I see
But of course – aren’t they all sired by me?
The father of Champions, there are a few
Look at my pedigree, grandchildren too
I sleep a lot now, on couch or in sun
and dream of the Shows – and prizes I won
I still love to go out for a ride in the car
Or a walk up the road, long as it’s not too far
My legs are tired and my joints get sore
Hey, Woof!  Who’s that at the door
And so, as a much loved pet and life-long friend
I have no fear of that fateful end.
(Author Unknown)