Dogs We Bred- Owned by Others/ co-owned 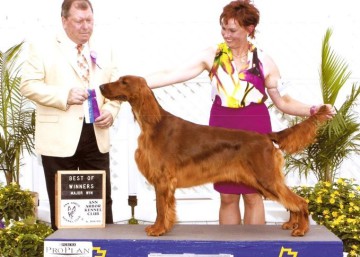 CH. Lunn's At the Top of Her Game

Serena is picture winning a major at the young age of 10 months.  She finished her championship a month later at the age of 11 months.  She was shown very spareingly.  She is a blast to show and she absolutely loves it.

Serena was bred to the Australian/US CH. Pendoric Perfect Thyming aka Alex and produced 1 beautiful girl which is staying at Lunn's. Serena now lives with Suzanne Horrigan in Akron OH and loves being the only spoiled child. 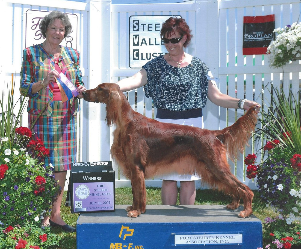 Kendall finished her championship and went to live with Sue Bailey in Indiana.  Sue had lost her Irish and was looking to fill the void. Kendall  is getting to be spoiled and  be an only dog. 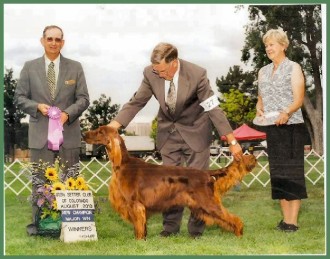 Conor was the red ribbon boy from Phoebe's first litter.  He finished his Senior Hunter title before 2 yrs old.  He finished his championship before his second birthday as well.  Conor is owned and loved by Dr Patricia Skavlen of Denver Colorado. 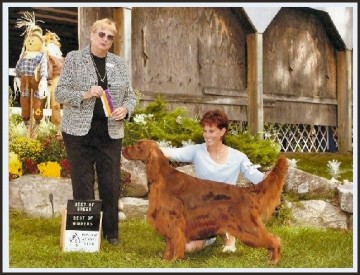 Kailen was the silver boy from Phoebe's second and final litter.  Kailen finished his championship in 2 short months.  Kailen is owned, spoiled and loved by Ed and Dorie McCarthy of Concord Twp OH.

Kailen passed away in August of 2019.  He will be greatly missed, run pain free Kailen. 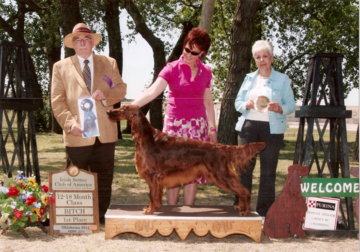 Tyra, from the " Super" litter finished her championship at 16 months from the bred by class.  She finished at the Golden Triangle Irish Setter Specialty under respected Irish Setter breeder Judith Zawikowski.  Tyra won her 12-18 class at the 2011 National in Oklahoma.  Tyra had her first litter of puppies July 24 2013.  6 handsome males and 6 gorgeous female.  We look forward to watching them grow.

Tyra now lives with Gaye Cocoman in Macedonia OH, playing with her squeeky tennis balls.  Her most favorite thing in the world. 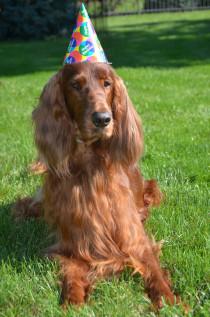 Quinn is a brother to Edward, Pepper and Conor.  He is wearing his birthday hat and is loved, spoiled and owned by Lauren Esping of Indiana.

Quinn passed away in his owners arms in August of 2021.  Run free sweet boy 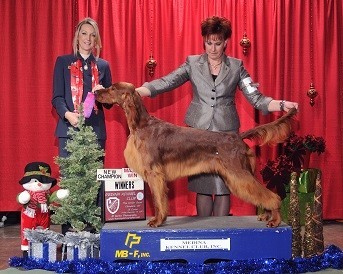 This is William, he is loved, owned and lives with Fiona Geiser in PA and co-owned by myself.  William finished his championship at 9 months old.  Finishing almost undefeated and from the bred by class.   We look forward to great things from William. 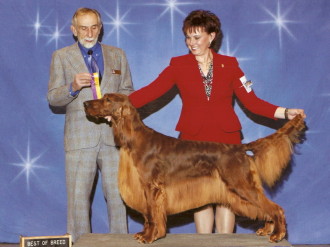 Mario is from the "SUPER" litter and finished his championship from the bred by class at 19 months of age.  Mario won his sweepstakes class at the 2011 National in Oklahoma.

Mario was campaigned as a special in 2012.  For the short time he has been out he received his Grand Championship status in under three weeks.  Mario is available for stud to approved bitches. Frozen semen available.

In November of 2013, Mario went to live with Pat Slutske in WI.  Pat had lost her Irish and was looking for a beautiful, well behaved boy to join her.  Mario fit the bill.  Mario is loving life as an only child. 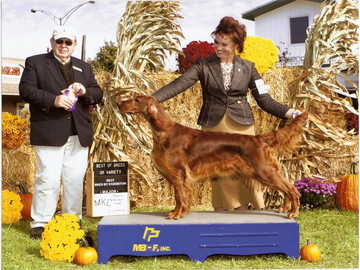 Mary is also from the "Super" litter.  Very much like her mother, she was shown very sparingly and was a Best of Breed winner from the class.  On Aug 14th 2012, Mary produced 5 gorgeous girls and 1 ever so handsome male. Mary has produced 2 champions to date.  Visit Serena and Paris' page for info/pictures on them

Mary gave birth on Nov 22 2013 to a gorgeous girl, her second and last litter  We look forward to her new baby girls progress.

Mary went back to live with her family in Canada and is an only child and is loved by Steven, Kelly, Devin and Kaitlyn

On April 1st 2021, we received very sad news that Mary passed away in the arms of her loved family.  Rest softly sweet girl.  You will be missed. Till we meet again. 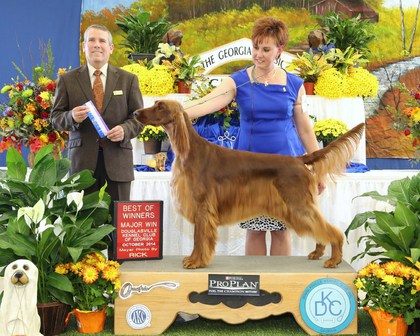 Penny is out of the late great Mason and beautiful Tyra.  Penny lives and owned by  Jack and Sarah Spaulding, she is shown and co-owned by myself.  Penny finished her championship  in 5 weeks and has 2 Best of Breed wins from the bred by class.  She finished with 2 five point majors.   Penny attended her first national in June of 2014 and won her sweeps class under a breeder judge out of 25 and went on to take a 2rd in her regular class.  So proud of this young girl, she is exquisite moving and beautiful to watch.  We look forward to more great things from Penny 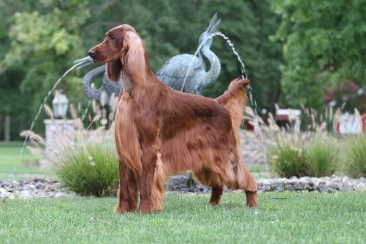 Alston is pictured at 2 1/2 years old and is from the X litter and a littermate to Britney,Sawyer and Sabrina  A beautiful balance of his mother and father with a big open side gait.  We look forward to a great show career for this handsome boy. Alston is loved, owned and spoiled by Marilyn Title of Marlyn Irish Setters and Carolyn McKenzie. 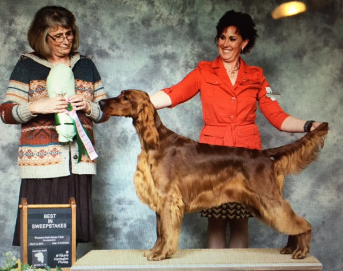 Sabrina, was the purple girl from this litter.  Littermate to Britney, Sawyer, and Alston.  At her very first show at 13 months she goes WB/BOW/Best bred by and  Best in sweeps at the supported entry for ISCA for a 4 pt major.  The very next day she went WB/Best Bred by and Best in sweeps for another 4 pt major.  Very proud of this young beauty. Sabrina finished in 3 weekends with multiple specialty majors.  She has also gone Best of Opposite sex at multiple specialties.  She is owned by Chris McSherry and myself. 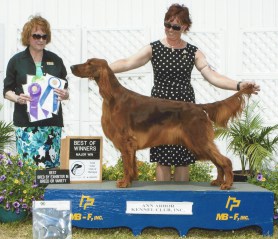 Pebbles is pictured winning her second major and finished the next day.  Only shown 4 weekends, Pebbles finished easily.  Pebbles sire is from the late but handsome Alex who is from Australia.  Though a complete outcross we are excited about Pebbles future and adding her genes to the Lunn line.Pebbles now lives in NY with Suzanne Cuomo and is loved and spoiled by them. 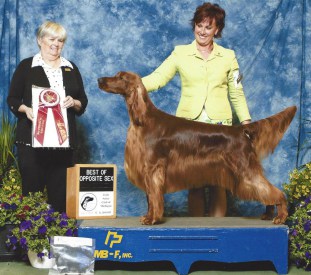 This is MJ, short for Mason Jr.  Taking after his father in many ways.  We felt the name appropiate.  MJ is pictured at 23 months old winning the best of opposite at the Michagan specialty under respected breeder judge Leta Graham. MJ was shown very sparringly and finish his championship with 18 points all from supported entry and the bred by class at 12 months old   Watch as he matures and does great things. He is available at stud and is OFA hips GOOD and elbows normal. MJ lives with Donna Turchanik and enjoyes being one of two. 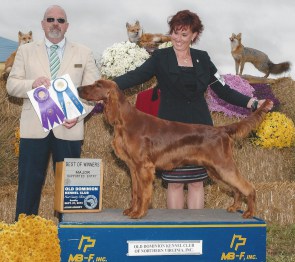 Britney is pictured at 8 months old..  She is definitely in love with herself and is from Paris' only litter. Her first show she goes WB and BOW for a 5 pt major.  At the time of this picture Britney has 14 points and all majors at specialties from the 6-9 class. Britney finished her championship in 5 weekends at 10 months old with 4 majors.  Britney showed the next weekend as a champion and now has 6 pts( majors) toward her Grand.   We are so excited and look forward to watching her grow and do great things in the show ring. Britney lives with Gaye Cocoman now with her aunt Tyra and enjoyes the leisurely lifestyle. 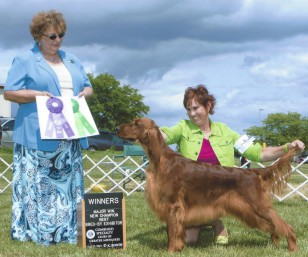 GiGi is from Sawyer's first litter and shown selectively. GiGi finished with 4 majors at 3 different specialties. She is super sweet and super fun to show.  Great blend of her mother and father.  Gigi now lives with Ed and Sharon Dehn and being a spoiled only dog. 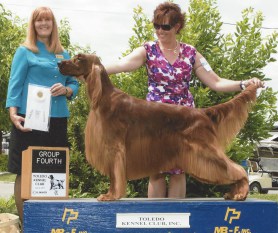 Sawyer finished his championship at 8 months and 2 days old with 4 majors from the bred by class at specialties. He is the first from the litter to finish.  Mister personality, we also look forward to watching him mature and do great things in the show ring. Sawyer has many champions to his credit and is a beautiful producer. He is living the life with Allan Muhic in Chardon OH and enjoying retirement. 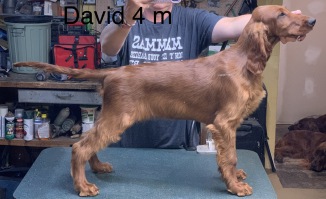 We had high hopes for David, David had other thoughts.  David did not care to show and has gone to live in the Cincinnati area with Chuck DeHamel and his family.